The Quantitative Sciences group is focused on quantitative data analysis to support program strategies for therapeutic projects that the foundation funds. This effort extends across all therapeutic areas in which the foundation is involved including maternal & child health, family planning, malaria, tuberculosis, neglected tropical diseases, HIV, and pandemic preparedness. He and his team are strong advocates of making research data “always FAIR and sometimes OPEN” to improve the impact data can have towards the problem it was collected to address, and beyond.

Dr. Roopa Dhatt is a passionate advocate for gender equality in global health and a leading voice in the movement to correct the gender imbalance in global health leadership. She is also a practicing Internal Medicine physician. Dr. Dhatt is particular More

Today, Women in Global Health has more than 25,000 supporters in more than 90 countries and continues to grow. Dr. Roopa Dhatt, the Executive Director, and the global team work with a network of WGH chapters in every region to challenge power and privilege for gender equity in health by mobilizing a diverse group of emerging women health leaders, by advocating to existing global health leaders to commit to transform their own institutions, and by holding these leaders to account.  With more than chapters in all regions, Women in Global Health is changing the conversation about women’s leadership in health at global, national and local levels.

Taghreed Al Shunnar will emphasise the need to work hard, contribute to the growth of ourselves and our countries and will describe how pharmacy combines the humanitarian and the science aspects.

Taghreed is a professional expert in the pharmaceutical industry in the MENA region. In 2011, she founded Professional Effective Solutions, a company that offers consultation to pharmaceutical companies in formulating effective business plans; new products launch strategies to meet future market trends as well as turnaround management.

During the period from 1/2016 till 12/ 2016 she also held the position of Strategic Healthcare Advisor at the First Energy Bank in Abu Dhabi.

Taghreed had an instrumental role in the dramatic growth and success of Hikma in the MENA region. She was also an important member of the Hikma IPO team that helped take Hikma through the process of its transformation to an internationally recognized public company listed on the London Stock Exchange in Nov 2005.

Taghreed holds a BS.C degree in Pharmaceutical Sciences and two Master degrees from INSEAD Business School; “Executive MBA” in 2007 and “Consulting and Coaching for Change” in 2012.

Today, besides her consultancy services, Taghreed sits on the Board of other pharmaceutical companies in Jordan, Switzerland, Tunisia and the UAE, where she provides guidance and support.

In this episode, Ms Cooke recommends taking the opportunities we are presented with, being open to change and looking at all the outcomes as they emerge.

Emer Cooke is currently Director, Regulation and Prequalification with the World Health Organization (WHO) in Geneva and has been with WHO since November 2016. In this role, Ms Cooke is responsible for leading WHO's global work on regulation of health technologies (medicines, vaccines, diagnostics, vector control products and devices), coordinating the regulatory teams (Prequalification, Regulatory Systems Strengthening, and Safety), and working with member states and international partners to assure the quality, safety and efficacy of appropriate health technologies. Ms. Cooke is a pharmacist with Masters degrees in Science and Business Administration from Trinity College Dublin. She has over 30 years’ experience in international regulatory affairs and spent 14 years (2002 to 2016) in management positions at the European Medicines Agency as head of Inspections and head of International affairs respectively.

Pernette Bourdillon Esteve, team lead for the incidents & substandard/falsified medical products group at the World Health Organization talks about how important it is to constantly learn in your work and challenge yourself to improve. More

Pernette Bourdillon Esteve has over 12 years’ experience in International Public Health, operating both at technical and policy levels. Since 2012 she has worked at WHO on the issue of substandard and falsified (SF) medical products. Prior to WHO, she worked for the United Nations Office against Drug and Crime, UNITAID, the French Foreign Affairs Ministry, and the private sector. She trained in public health, Political Science and development economics. She speaks English, French and Spanish.
Watch video• Contact

Professor Robert Sindelar, Dean Emeritus at the University of British Columbia, Vancouver, Canada, is Catherine Duggan’s guest on this week’s episode of “The FIP CEO interviews . . .”.

More
He is Professor of Pharmaceutical Sciences and Dean Emeritus, University of British Columbia. Was elected fellow of the Canadian Academy of Health Sciences, and the International Pharmaceutical Federation. Previously he served as Vice President of Innovation, Research & Academic Affairs at Providence Health Care, President of the PHC Research Institute and Associate Dean Research in the UBC Faculty of Medicine. He is a founder of the Centre for Drug Research and Development and was President of the Global Drug Commercialization Centre-China, both national translational medicine endeavours. He has co-edited 5 editions of the textbook entitled “Pharmaceutical Biotechnology: Fundamentals and Applications.”
Watch video• Contact

Pharmapod’s chief executive officer, Leonora O’Brien, speaks about her professional and personal journey to date and why positive approaches are especially important for pulling through uncertain times like COVID-19.

Leonora is the founder & CEO of Pharmapod, a company that develops pioneering software to promote medication safety for patients worldwide. Leonora has 25 years’ experience in pharmacy practice, policy development and regulatory affairs. Past roles include working for the Pharmacy Regulator in Ireland and across 7 European countries for an international pharmacy group, implementing pan-European professional standards & anti-counterfeit programmes. She also held the position of Chief Pharmacist for the largest pharmacy chain in Ireland. This year Leonora won Business Woman of the Year in Ireland and is also a finalist in the EY Entrepreneur of the Year awards.

How COVID-19 has magnified issues of inequity and inequality is discussed in the latest episode of “The FIP CEO Interviews . . .”. Catherine Duggan speaks to FIP’s immediate past president Carmen Peña.

•Grand Cross of the Civil Order of Health of Spain, 2015

•APSTJ Woman Scientist, The Academy of Pharmaceutical Scientist of Japan, 2015

•Encomienda / Medal of Pharmaceutical Merit of the Brazilian Federal Council of Pharmacists, 2010

•Other recognitions and honors of Spain and other countries of the world.

In today’s episode, our CEO Catherine Duggan and Andy Gray, senior lecturer, University of KwaZulu-Natal, South Africa, will shed light on the role of pharmacists in clinical research practices.< More

Andy Gray is a senior lecturer in the Division of Pharmacology, Discipline of Pharmaceutical Sciences, University of KwaZulu-Natal, former vice president, bureau member, chair BPP, Hospital Pharmacy Section President, FIP; co-director of the WHO Collaborating Centre on Pharmaceutical Policy and Evidence Based Practice; Honorary Senior Scientist: Consultant Pharmacist for the Centre for the AIDS Programme of Research in South Africa; Visiting Fellow, Faculty of Pharmacy, Rhodes University, Grahamstown; Member of the World Health Organization’s Expert Panel on Drug Policies and Management; Associate Editor of the South African Pharmaceutical Journal; section editor of the Journal of Pharmaceutical Policy and Practice; and serves on the editorial board of the International Journal of Clinical Pharmacy, Health Systems and Reform, and BMC Health Services Research.

More
Prof. Trevor Jones, Professor, King's College London, Former Head of R&D, Wellcome UK
A visiting professor at King's College London, and a former Head of R&D, at Wellcome. He continues to have a distinguished career in the pharmaceutical and biotech industry as well as in academia.
He was main board director for Research & Development at The Wellcome Foundation Ltd (Wellcome plc). During his tenure, the organisation was responsible for the development of a number of significant products. He was not only involved in the introduction of the HIV/AIDS drug AZT at his time with the Wellcome Foundation but also its pricing in the USA/EU and liaison with the South African Government over patents.
Prof. Jones assisted the Government to attract inward investment into the UK, particularly from the Japanese pharmaceutical companies through the "Prescribe UK" initiative (with Virginia Bottomley and David Sainsbury). He also led negotiations with the UK Government on the Pharmaceutical Price Regulation Scheme (PPRS) when he was head of the ABPI. His latest role is advising the Wales Government on the future of the NHS as a member of The Bevan Commission. He is also a non-executive director of the new life science investment fund, Arix Bioscience Plc and the Oxford based Drug Discovery company, e-Therapeutics plc.
Prof. Jones is a member on the FIP Expert Advisory Group for COVID-19 and has always been an active member in FIP:
Member of the Board of Pharmaceutical Science of FIP - 1980-1984
Member of Industrial Pharmacy Committee 1978-1983
Member of FIP expert working group on drug dissolution 1979-1984
President of the FIP International Commission of Technology 1979-1983
Watch video• Contact

Sign-up to the newsletter
Join
Next FIP event CPS Regional Online Workshop: Have your say! Help us build your positive practice environments and shape worldwide policy for a sustainable pharmacy profession in the Americas region 6 February 2023, 20:00 - 21:30 CET starts in 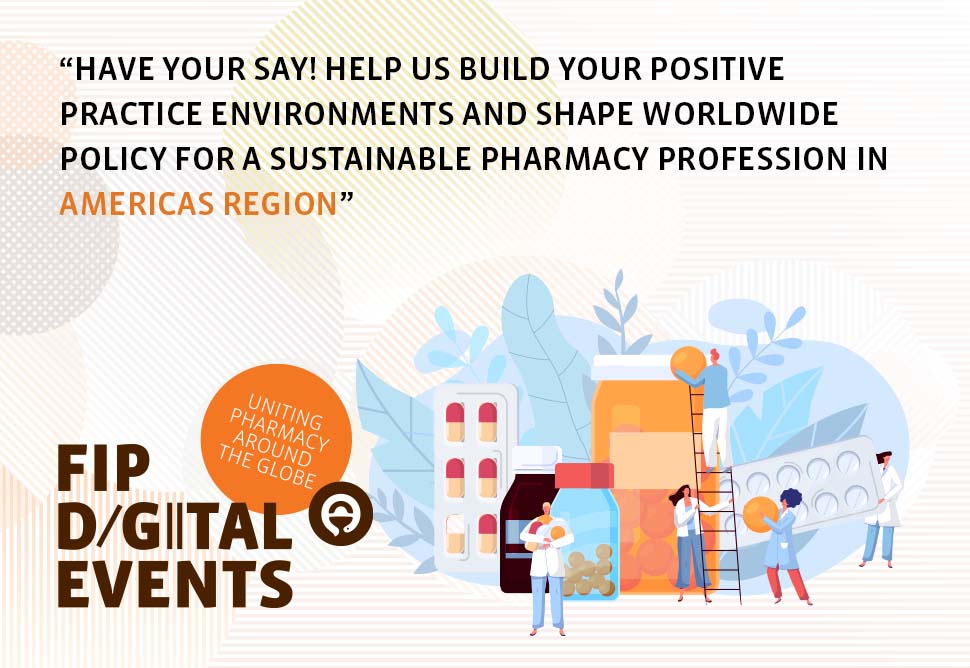